"As kingfishers catch fire, dragonflies draw flame; / [ . . . ] Each mortal thing does one thing and the same: / Deals out that being indoors each one dwells; / Selves -- goes itself; 'myself' it speaks and spells, / Crying 'What I do is me; for that I came'." --Gerard Manley Hopkins 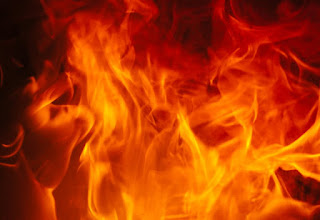 Abba Lot went to see Abba Joseph and said to him, "Abba, as far as I can, I say my little office, I fast a little, I pray and meditate, I live in peace, and, as far as I can, I purify my thoughts. What else can I do?" Then the old man stood up and stretched his hands toward heaven. His fingers became like ten lamps of fire and he said to him, "If you will, you can become all flame."

Sayings of the Desert Fathers 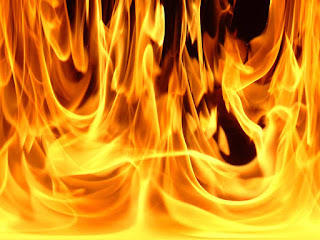 Posted by Beth Impson at 10:37 PM 2 comments: Links to this post

Worms normally come to my attention in one of two ways – I’m teaching Blake’s “The Sick Rose” to my students, or it’s raining. The literal worm evoked in Blake’s poem is likely to appear first to be one of those tiny green caterpillar-like creatures (actually the larva of the sawfly) which eats into the heart of a rose and destroys it; then, when the worm is said to “fly through the night,” it’s likely to evoke the image of a dragon. These creatures leave only ruin in their path, and they work in the poem metaphorically to lead us to see the destruction caused by the “dark secret love” that is lust. I have no sympathy for such worms, literal or figurative.

Earthworms, on the other hand, stay underground eating dirt, decently out of sight and mind, until it rains, when they appear in multitudes on the sidewalks. I hate walking to class in the rain because of these pale grayish snaky little creatures; invariably there are so many I can’t avoid the disgusting squish of several beneath my shoes before reaching my destination. And when the sun returns, the shriveled corpses of those who waited too long to return home continue to unpleasantly litter the walk until the groundskeepers’ leaf blowers scatter them into the grass. Living or dead, they seem of no particular value, worthy only of being crushed beneath our shoes as we go about our important business.

It’s earthworms, in fact, that give us the phrase "worm theology," the image suggesting that we human beings, too, are just wretched worthless worms in the dirt, deserving nothing more than to be ground under God’s foot. I have always rejected this conception of human worth. We are indeed desperately fallen, but we were created by God Himself – whose creation was, by His own affirmation, "very good" – and are redeemed by the sacrifice of His Son: and that means we were and are not wretched worms (even if we foolishly choose to live in the dirt sometimes). We were originally destined for glory and eternal life with God, and we may still receive that destiny in Christ, who loves us even in our fallenness and delights in us when we become His brothers. As C. S. Lewis puts it, we would tremble before the least and worst human being if we truly understood that each of us is an immortal soul.

Lately, however, I've been doing some thinking about worms. I remember the topsoil my daddy used to sift through, knowing by its dark, rich texture where he would find earthworms to bait his hook to catch trout for our table, where they had done their job well so that our garden would grow a rich harvest. And now, after a bit of research, I’ve decided that worm theology is not just unfair to man, it's unfair to worms. In fact, earthworms are greatly slandered if we think of them as wretched, useless creatures deserving of no regard. Rather, they are a lovely example of true servanthood.

The earthworm, a simple, blind, not especially appealing creature, lives underground and is seldom seen (and greatly abused by bird and man when he is). He goes quietly, and mostly unremarked, about his job of improving our lives by aerating our soil so it will allow the roots of plants to grow deep and strong and more readily receive the nourishing rain. He eats dirt and organic matter, both dead and living, increasing the earth’s fertility by mixing these elements and thereby enriching the soil with his waste and, ultimately, with his very body. He may not look like much, his work may seem mundane and even disgusting, but our lives would be far different and more difficult without him.

He is indeed a picture of serving at its best: fulfilling one's purpose, whatever God has made it to be, without complaint, without show, without striving after prestige or reward; giving one's life solely for the benefit of others. Of course, the worm does this without thinking about it, without agonizing over the temptation of sin and trying to rationalize his duty away. He simply does what he was created to do; he “selves himself,” lives the inscape poured into him by the Creator.

“Worm theology,” as it’s usually intended, indeed fails to capture man’s dignity as a creature made in God’s image; but real worm theology shows us the excellent way: to live out that image in daily, unassuming service that glorifies God without regard to self.
Posted by Beth Impson at 10:49 PM No comments: Links to this post

Lest You Sorrow as Others Who Have No Hope

I Thess. 4:  But I do not want you to be ignorant, brethren, concerning those who have fallen asleep, lest you sorrow as others who have no hope. For if we believe that Jesus died and rose again, even so God will bring with Him those who sleep in Jesus.
For this we say to you by the word of the Lord, that we who are alive and remain until the coming of the Lord will by no means precede those who are asleep. For the Lord Himself will descend from heaven with a shout, with the voice of an archangel, and with the trumpet of God. And the dead in Christ will rise first. Then we who are alive and remain shall be caught up together with them in the clouds to meet the Lord in the air. And thus we shall always be with the Lord. Therefore comfort one another with these words.

A friend died tonight.  I hadn't seen her in years, true, and we'd only connected a little on Facebook in the past couple of years.  But she was a friend.  We were in the same church many years ago when I was a young married with a couple of little ones and when she met and married a wonderful young man.  She was diagnosed at that time with MS, and the years have been tough for them.  But they had a family and they had plenty of love and laughter, and they had joy, much joy -- so appropriate because her name is Joy.  She had been in a home recently because it had become too physically difficult for Scott to fully care for her, and in the hospital, and I'm not close enough now that I knew any of the details of these times.

But there was that time we knew each other, and that one conversation I've always remembered.  Not the substance, but the knowing that here could be a heart sister, a kindred spirit.  And so although I've not been part of her life for most of it, I still think of her as a friend, a special friend, in fact, and I am intensely grateful that I knew her even for a while, and that I knew always that her joy was infecting the world with His love every day, and that she was being loved by a faithful man and a deeply caring family.

I ache for them tonight; their loss is great.  I pray for comfort in their sorrow, for sweet memories to lace the grief of loss.  But I rejoice for Joy, who is whole and well and rejoicing in the presence of the Lord she loved and served.  And I rejoice that Scott and those who have loved her will see her again -- and that even I will see her again and with all eternity to fulfill the promise of that conversation nearly 40 years ago.

Love and prayers to you, Judy, and Scott, and all Joy's family and friends.

Posted by Beth Impson at 11:26 PM No comments: Links to this post

Beth Impson
Daughter, sister; wife, mother, grandmother; writer; teacher . . . desiring to please the Lord in all these vocations though I fall short so very often: yet knowing that I am always under the Mercy.

You are welcome to visit my college course website, Reflected Light, where you will find course information as well as the text of some of my presentations and book lists I've created for students.